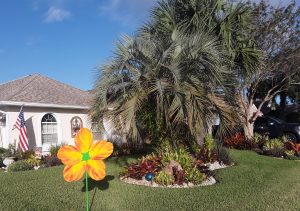 After a postponement due to heavy rains on October 19, the Garden Tour was held on Saturday, October 26 from 9-4. Scattered showers did not deter the over 100 attendees from visiting the eight residential gardens in Palm Coast. This year the club contracted for a 20-passenger van for an additional charge allowing participants a carefree day. 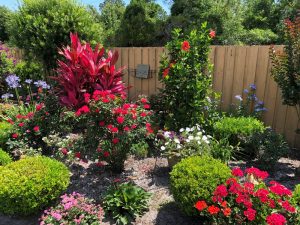 Each garden was selected for its plant diversity and design. Garden accessories such as water features, colorful pots, sculptures, wind mills and seating were tastefully placed in many of the gardens to add an element of interest. Some gardens featured bromeliads, tropical species, perfectly shaped hedges and topiaries, natives, and vegetables. 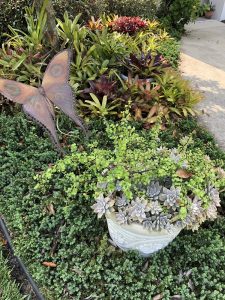 There was also an education in the use of different types of mulch. Some gardeners used cypress mulch because it does not float, others used fine pine bark, and another used environmentally friendly Florimulch composed of shredded melaleuca, an invasive exotic in South Florida. However, one of the main attractions was the 3-6 inches of pine needle mulch used by one of the homeowners. He proclaims it prevents weeds and also allows the soil to breathe as well as acidifying the soil. 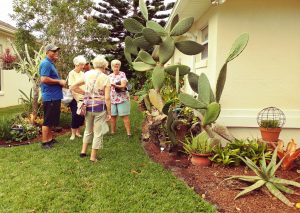 Three garden locations were a rest stop for ice tea, lemonade and baked goods provided by members of the club. Luckily for the people on the van, the homeowner at the last garden had grilled hot dogs for the group!

All in all it was a very successful fundraiser for the club.