September 2021 Selection of the Month

SEPTEMBER 2021 GARDEN OF THE MONTH ANNOUNCED! 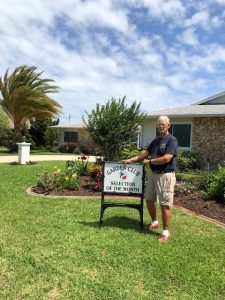 September Selection of the Month

Jeff Kingdon of Crazy Horse Court has been recognized as September 2021 Selection of the Month by The Garden Club at Palm Coast.

Jeff is a Veteran who served in the US Marine Corps. He originally had lived in New Jersey, Massachusetts and Connecticut.  He moved to Palm Coast in 2010 where he enjoys his retirement.  He used to have a sailboat (Contessa) and for 12 years he would sail all over the Caribbean during the winter and spend summers and/or hurricanes in Palm Coast. He belongs to a woodcarving group at the Palm Coast Community Center where he is mastering the art of carving wooden figurines then paints them for the finishing touch. He also enjoys creating wooden plaques for special occasions!

Living on the canal his home has a nautical look with a large sailboat in the front window along with a lighthouse lamp post with red mandevillas and beautiful white ground orchids, that is, when the deer doesn’t eat them.

The front island has a diverse landscape of pink and red roses, yellow canna lilies, red amaryllis, pagodas, pink and white vincas, plumbago, Petra and Mammy crotons, and several lavenders enjoyed by many bees and monarch butterflies along with a full bloomed dark pink crape myrtle and a Queen palm that provides a natural canopy.

The left side of the house had fully in bloom pink rain lilies after we had a hard rain storm. Moving along front left there is a sago palm surrounded by blue daze.  As you work your way to the back there are pink rain lilies, variegated ginger, white spider crinum lilies, red canna, vincas, Hawaiian ti, Japanese pittosporum and a pink oleander bush.

The back yard faces the canal with a rock wall and sea grapes.  There are several large bee loving lavenders, Mexican petunias, pink beach roses and red canna lilies on the right side. The back is still a work in progress as he wants to plant 2 additional sable palms.

Jeff likes to get dirt under his nails and touching nature. This is evident with all his pollinating visitors.

Selection of the Month Committee Chair

This entry was posted in Selection of the Month. Bookmark the permalink.

4 Responses to September 2021 Selection of the Month