Elma Chung has been a Garden Club member since 2004 and is an active participant in the Propagation Guild. Elma has been collecting plants for many years and that shows in her yard. Her garden is jam-packed with all kinds of plants and often multiple different species of the same genus. 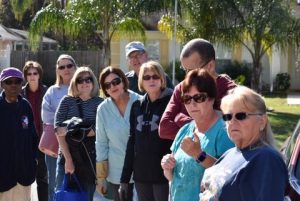 On January 17 more than 15 members of the Propagation Guild gathered at 10 AM at Elma’s home where we were invited to a “Just Dig It” party. This meant the PG members were welcome to dig up plants and collect cuttings.

It had been a frosty morning and many members were dressed in layers. But the sun was out in full force to warm the air and the layers of clothing were quickly peeled off. 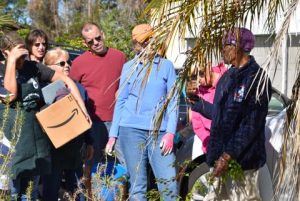 The party started with instructions on the rules of the game: each member was allowed to collect one plant or cutting for her/ himself and 10 for the Propagation Guild. Each member was encouraged to “signup” for one kind of plant, in order to avoid too many of one kind and too little variety. Then we went on a tour of the garden to explore the inventory. Well it was like a bunch of kids in the candy store: big eyes and a lot of drooling. In the meantime we were instructed by Elma and Jane on details about the various candidate plants, how to cut or divide them and how to get them to root. 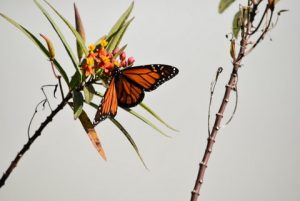 And then we were let loose. Lots of Milkweed and the butterflies were still making the rounds. 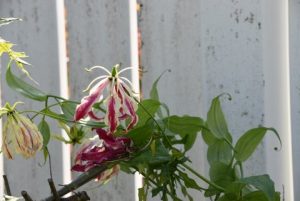 ……and then there was this Gloriosa, which was not for the takers. 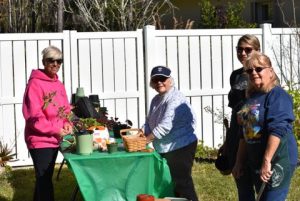 Jane came prepared for the processing of the cuttings and plants. She setup tables, brought pots and soil. So the members could plant their treasures right away and drive home with propagated stock, which will re-appear at the Spring Festival.

The party was a real treat for the avid Propagators. Thank you so much, Elma!!!

By the way, mark your calendars: Spring Festival, April 13 at the Flagler High School.

This entry was posted in Garden Club, Propagation Guild. Bookmark the permalink.

1 Response to “Just Dig It” party