December Yard Selection of the Month

Posted on December 3, 2017 by FLGardener

Antonio and Ana Sousa of Furness Place, Palm Coast have been recognized as December Selection of the Month by The Garden Club at Palm Coast. 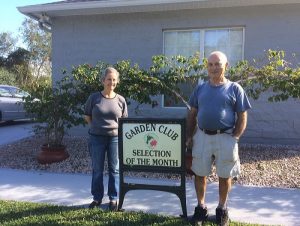 They are originally from Connecticut and moved to Palm Coast in 2014.

Antonio does most of the yard work but has help from Ana as well and they have a very nice manicured landscape.  Their front walkway welcomes you to two large connecting arches of their Bougainvillea bush.  Heading up to front door on the right flower beds they have red Geraniums, white Daisy Mums, orange Marigolds, pink Hibiscus, and Vincas, two Hydrangeas, Trumpet plant, several alternating large variegated Hostas, Mother of Tongue plants and a large Rosemary bush that completes a running hedge up to the house. Right side of house there are some yellow and light pink Roses.

At the front door area  they have variegated hedge bushes with two large potted Begonias, there are two nice blue and pink vase stands one with an owl and the other has a praying Angel.  Hanging above is a nice peace Angel and a Rooster on the opposite side.

There are several fruit trees in which he grafts to expand his fruit trees on either side of the house.  They have five Fig trees, three Navel  Oranges, two Olive trees, Lime tree and about a dozen Papaya trees. He even has some Potato plants growing underneath the Orange tree!

He is especially talented with his very large vegetable garden that measures 30’ by 30’. He grows Cabbage, Kale, Pole Beans, large Carrots, Lettuce, Scallions, Squash even Grapes.  Many of his Papaya trees border the left side of the vegetable garden as well as several Rosemary bushes. There are even several tomato plants in large pots ready to be planted.

Along the edge of their property there is an empty wooded lot with small Fan Palms and Acorn Squash growing along the border and there is even a large Acorn squash that made its way into the woods and is growing up a tree!  They also plant Temoso seeds (aka Lupini beans).  You boil them up then peel the skin off and eat them like peanuts for a snack. They always had a big garden in Connecticut and they have surely mastered the saying of ”living off the land!”

This amazing yard really has curb appeal especially when you see the beautiful Bougainvillea Arches and their nice manicured yard.

This entry was posted in Garden Club, Member Articles, Selection of the Month. Bookmark the permalink.