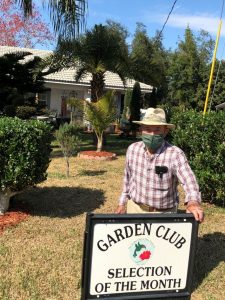 Lyman of Fernmill Lane has been recognized April 2021 Selection of the Month by The Garden Club at Palm Coast.

Originally from Connecticut, Jim has been in Palm Coast since 1998.

He was a mason by trade and now enjoys reading. Since his retirement he has been working in his yard to keep himself busy.  He has several varieties of trees and bushes and he is doing his part in helping Palm Coast continue to be the Tree City.

What caught my eye was the thicket of Heavenly bamboo, (he started with only two) that he keeps nicely trimmed and is an entrance to a tranquil sitting area with several art features, including white marble Flamenco dancers, a fountain, a spectacular wisteria arbor, sun dial and a light house.

His front yard has a large Norfolk Island pine, (which he is attempting to propagate) and a variety of palm trees. There are topiary shaped Schilling holly bush hedges and holly trees throughout.  An orange flowered hibiscus, elephant ears, rose bushes and pineapples add diversity. Near the front door are large pots of philodendron and an elegantly curved purple bougainvillea, two potted purple and blue flowering bird of paradise, slim cedar trees and some podocarpus.

As a former mason he decided to cover his wooded picnic table with tile on the table and the seats since he has had to replace two tables due to weather damage.  He is designing a new garden area along the side of the house that has pavers. He has put sea shells into the concrete and will eventually add large flower pots to complete the area.

He has a large area in his side lot which he tried to make into a putting green, he made a large    hedge of trimmed Schilling holly bushes in a circle, however, he is having a hard time keeping the grass green like a golf course.

This entry was posted in Uncategorized. Bookmark the permalink.