February 2021 – Selection of the Month 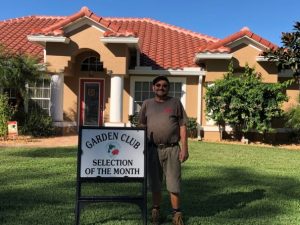 Joaquin (Jack) Ligeiro of Edge Lane and also proud owner of his back lot address of Eric Drive has been selected as February 2021 Garden Selection of the Month by The Garden Club at Palm Coast.
Jack, originally from Portugal, lived in New Jersey for 40 years with his lovely wife Evonne and they moved to Palm Coast 4 years ago.
When I first noticed this back lot I thought this has to be a private nursery but I soon discovered that it belongs to Jack as well. When he retired he wanted a hobby to keep him busy. The entire lot had an impressive thick mat-type ground covering with areas cut out where the plants go in order to control the weeds and no messy dirt to walk on. This entire lot looks like an orchard with many fruit trees, flowers and various vegetables. He has over 50+ banana trees (and most had many bananas on them) as well as many varieties of oranges, lemons and tangerines. 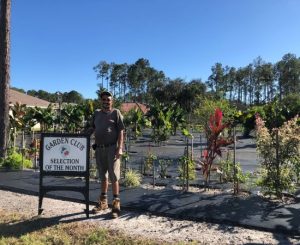 There were also fig trees, peach, apple, loquat, olive, plum, pear, mango, papaya, cherries, and pistachio. In between fruit trees in each row he took advantage of the spaces by filling them in with his many vegetables such as different varieties of jumbo lettuce, cucumbers, tomatoes, pole green beans, pineapple, hot chili peppers, chives, parsley, mint, oregano, and star fruit.
He has an impressive large dragon fruit and this plant has given him over 28 fruits! Closest to the street on Eric Lane he reserves this area for flowers and plants such as vinca, pagoda, Hawaiian ti, milkweed, liriope, cockscomb plume, snake plant, aloe, mountain snow cap, crotons, asparagus fern, rubber trees, century plant, and Schefflera arboricola.
You must be wondering what does he do with all his harvest? He says he loves to give it away to his friends and neighbors around him! When asked how he takes such good care of his crops, he showed me two large fertilizer charts that shows you when to fertilize, what kind to use and how many times a year he has to use them. I was totally amazed!
His front yard has a large magnolia tree, holly trees, some Phoenix roebelenii, bottle brush, various hedges and a large poinsettia plant. In the back yard along the house there are colorful crotons, a small waterfall pond with stone turtles and knockout roses.
Submitted by Nancy Iandoli

Selection of the Month Committee